Though this page is usually focused on my community of Issaquah, the idea behind "just say hello" is not limited to the boundaries of particular locations.

After a lunch with a very close friend in Seattle, and while I myself was healing from a pretty difficult exacerbation of my own chronic illness, Lorenzo approached my truck in the parking lot as I was leaving. He had a very sweet energy about him.

As soon as he opened his mouth,  I could tell he had told his same story to many people that day. He was repeating it without emotion, almost like a script.  He told me that needed $20 in order to get into the local hostel that was up the street.  I listened to everything that he had to say. And then I smiled from ear-to-ear and introduced myself. As soon as I did that he smiled from ear-to-ear and reached out to shake my hand.

That's when he told me how many people had said horrible things to him that day in response to his plea for help. He said he heard everything from "get a job" to "f*** off." Tears filed his eyes.

I asked him where he was from and engaged a conversation... turns out he's new in town after being kicked out of his mother's house in Mississippi. When he arrived in Seattle three days ago, he was supposed to stay with his grandmother. Unfortunately she also chose to kick him out. Now he lives on the streets.

I noticed he had the most beautiful long fingernails that at one point had been covered in acrylics and manicured with fresh nail polish. I gave him a genuine compliment about his beautiful hands, and that's when he told me that he absolutely loves to get his nails done!

I knew I couldn't give him the money for the hostell that day. But I also knew that I could connect him with my dear friends at the Facing Homelessness office in Seattle. I gave him bus fare to the University District, and told Rex and Sarah at Facing Homelessness Seattle that Lorenzo might be coming to visit them. He may or may not follow through.

But that's not the point.

The point is that it's simple to take the time to say hello to our fellow human beings. This is how we begin to use the power of LOVE to break down the feeling of isolation, loneliness, and invisibility that often accompanies homelessness.

I asked if I could take his picture, and he burst into the most beautiful smile! I hope to see Lorenzo again. 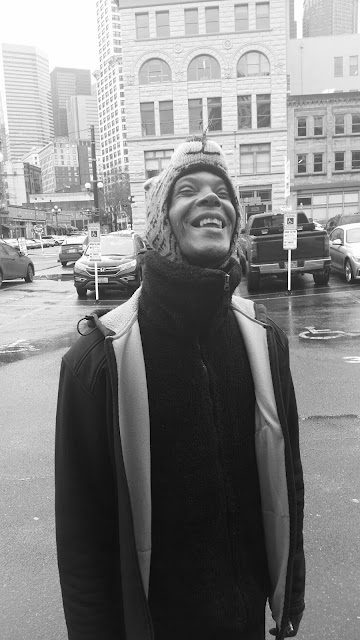 Posted by BluePhoenix at 7:17 AM