As told by Clarissa Pinkola Estes

She had done something of which her father disapproved, although no one any longer remembered what it was. But her father had dragged her to the cliffs and thrown her over and into the sea.

There, the fish ate her flesh away and plucked out her eyes. As she lay under the sea, her skeleton turned over and over in the currents.

One day a fisherman came fishing, well, in truth many came to this bay once. But this fisherman had drifted far from his home place and did not know that the local fisherman stayed away, saying this inlet was haunted. The fisherman’s hook drifted down through the water, and caught of all places, in the bones of Skeleton Woman’s rib cage.

The fisherman thought, “Oh, now I’ve really got a big one! Now I really have one!” In his mind he was thinking of how many people this great fish would feed, how long it would last, how long he might be free from the chore of hunting. And as he struggled with this great weight on the end of the hook, the sea was stirred to a thrashing froth, and his kayak bucked and shook, for she who was beneath struggled to disentangle herself. And the more she struggled, the more she tangled in the line. No matter what she did, she was inexorably dragged upward, tugged up by the bones of her own ribs.
The hunter had turned to scoop up his net, so he did not see her bald head rise above the waves, he did not see the little coral creatures glinting in the orbs of her skull, he did not see the crustaceans on her old ivory teeth.
When he turned back with his net, her entire body, such as it was, had come to the surface and was hanging from the tip of his kayak by her long front teeth.

“Agh!” cried the man, and his heart fell into his knees, his eyes hid in terror on the back of his head, and his ears blazed bright red. “Agh!” he screamed, and knocked her off the prow with his oar and began paddling like a demon toward shoreline. And not realizing she was tangled in his line, he was frightened all the more for she appeared to stand upon her toes while chasing him all the way to shore.

No matter which way he zigged his kayak, she stayed right behind, and her breath rolled over the water in clouds of steam, and her arms flailed out as though to snatch him down into the depths. “Agh!” he wailed as he ran aground. In one leap he was out of his kayak, clutching his fishing stick and running, and the coral white corpse of skeleton woman, still snagged in the fishing line, bumpety-bumped behind right after him. Over the rocks he ran, and she followed. Over the frozen tundra he ran, and she kept right up. Over the meat laid out to dry he ran, cracking it to pieces as his mukluks bore down.

Throughout it all she kept right up, in fact, she grabbed some of the frozen fish as she was dragged behind. This she began to eat, for she had not gorged in a long, long time. Finally, the man reached his snowhouse and dove right into the tunnel and on hands and knees scrabbled his way into the interior. Panting and sobbing he lay there in the dark, his heart a drum, a mighty drum. Safe at last, oh so safe, yes, safe thank the Gods, Raven, yes, thank Raven, yes, and all bountiful Sedna, safe… at…last. Imagine when he lit his whale oil lamp, there she – it – lay in a tumble upon his snow floor, one heel over her shoulder, one knee inside her rib cage, one foot over her elbow.

He could not say later what it was, perhaps the firelight softened her features, or the fact that he was a lonely man… but a feeling of some kindness came into his breathing, and slowly he reached out his grimy hands and using words softly like a mother to child, began to untangle her from the fishing line. “Oh, na, na, na.” First he untangled the toes, then the ankles. “Oh, na, na, na.” On and on he worked into the night, until dressing her in furs to keep her warm, Skeleton Woman’s bones were all in the order a human’s should be. He felt into his leather cuffs for his flint and used some of his hair to light a little more fire. He gazed at her from time to time as he oiled the precious wood of his fishing stick and rewound the gut line.

And she in the furs uttered not a word – she did not dare – lest this hunter take her out and throw her down to the rocks and break her bones to pieces utterly. The man became drowsy, slid under his sleeping skins, and soon was dreaming. And sometimes as humans sleep, you know, a tear escapes from the dreamer’s eye; we never know what sort of dream causes this, but we know it is either a dream of sadness or longing. And this is what happened to the man. Skeleton Woman saw the tear glisten in the firelight and she became suddenly soooo thirsty. She tinkled and clanked and crawled over to the sleeping man and put her mouth to his tear.

The single tear was like a river and she drank and drank and drank until her many-years-long thirst was slaked. While lying beside him, she reached inside the sleeping man and took out his heart, the mighty drum. She sat up and banged on both sides of it: Bom Bomm!…..Bom Bomm! As she drummed, she began to sing out “Flesh, flesh, flesh! Flesh, Flesh, Flesh!” And the more she sang, the more her body filled out with flesh. She sang for hair and good eyes and nice fat hands. She sang the divide between her legs, and breasts long enough to wrap for warmth, and all the things a woman needs. And when she was all done, she also sang the sleeping man’s clothes off and crept into his bed with him, skin against skin.

She returned the great drum, his heart, to his body, and that is how they awakened, wrapped one around the other, tangled from their night, in another way now, a good and lasting way. The people who cannot remember how she came to her first ill fortune say she and the fisherman went away and were consistently well fed by the creatures she had known in her life under water. The people say that it is true and that is all they know.

I still believe in LOVE.

I still believe in Love.  Even after all of the suffering, the pain, the broken moments and the times I have had to crawl out of the darkness again and again, I know that Love is ever present. It is constantly transforming, changing, scouring, cleansing, and urging me into a truer version of myself.  It may take the often expected form of contentment and joy, or it may manifest as a feeling of being held precariously above an abyss so great and incomprehensible that it can only be described as Mystery. Sometimes it feels like a soulful cry; a yearning; a sudden push of momentum; or a painful burning away of the cartilage surrounding old wounds from the past.  Love is not for the faint of heart. Love is courageous. It brings me into alignment along a path that is tumultuous, scoured with the sandy granules that the Divine uses to shape me into my Calling. This is Love. 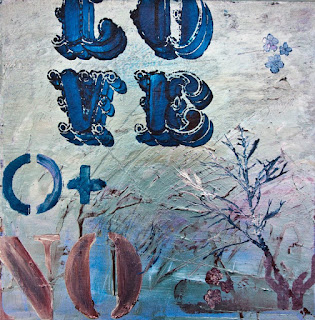 Ineffable Harmony - A meditation on John the Scott

A Neoplatonic tree
Rooted in ineffable harmony
From the branches
Soaring above the earth
To the gritty tendrils
Stretching into time gone by.
Scripture.

Darkness and light
Sing a chorus of color
In natural splendor
Ruled by the cycles
Of death birthed into life.

Creation as a mirror of the Creator.
Love absorbed through every fiber.
Full knowledge never disclosed.
Unknowable
Yet observed
In
Biological cells
Rock formations
Simple flowers.

Beyond time
Yet noticeable
In
Every moment.
Giver of language
Yet outside the realm of words.

A unity that requires
No differentiation,
No separation,
No lines,
No objects,
Not even Being itself…
Simply incomprensible wholeness


comprehended in every piece of creation.

The Climb - Meditation on St. Bonaventure through Poetry and Art

Standing at the edge of
Mystery
An abyss of
Light
Filled with ineffable
Darkness.

Letting go of what was
Attempting to describe the
Indescribable
Through human language
Just as Mystery
Self-communicated
Through the observed.

Blinded by the mundane
Awareness of everyday
Miracles
Struggling to
Open perception
To incarnate beauty.

The corporeal world enters
Sensually
Through the vessel
Human.

Shades of black
And
Pearlescent white
Illuminate interiority
And gently nudge
Onward…
Through…
Into…
The goodness of
God.