The first Sunday of Advent begins with a quote to accompany the walk into darkness before the Light of the World is born.
Rather than writing on this topic tonight, I am contemplating the following quote offered by Fr. Richard Rohr:
Advent [meaning “coming”], to the Church Fathers, was the right naming of the season when light and life are fading. They urged the faithful to set aside four weeks to fast, give, and pray—all ways to strip down, to let the bared soul recall what it knows beneath its fear of the dark, to know what Jesus called “the one thing necessary”: that there is One who is the source of all life, One who comes to be with us and in us, even, especially, in darkness and death. One who brings a new beginning. —Gayle Boss
Questions to consider...
How do I avoid the darkness in my life? Where am I afraid and how do I approach it?  How do I react to suffering in myself and others?
Posted by Runner Duck Team 6 at 11:36 PM No comments:

On this Thanksgiving, I find myself contemplating gratitude with the helpful insights of Theologian Henry Nouwen.
I will offer two quotes below that inspired tremendous gratitude in my heart.  Perhaps you'll find that Nouwen also inspires you this Thanksgiving.
QUOTE 1
Five lies of identity:
1) I am what I have
2) I am what I do
3) I am what other people say or think of me
4) I  am nothing more than my worst moment
5) I am nothing less than my best moment.
QUOTE 2
"We are only truly grateful people when we can say thank you to all that has brought us to the present moment...
Let’s not be afraid to look at everything that has brought us to where we are now and trust that we will soon see in it the guiding hand of a loving God."
Wishing you a blessed Thanksgiving!
Who was Henry Nouwen?

Henri Nouwen was a spiritual thinker, a synthesist and one of the first in our time, along with Thomas Merton, to consciously develop a “theology of the heart” and to lay this down as a template for both clergy and lay persons. Henri had an unusual capacity to write about the life of Jesus and the love of God in ways that have inspired countless people to trust God more fully.

He showed, and continues to show, a generation of ministers, teachers and seekers how one’s gifts are to be placed at the service of those whom God places in our path. He gives us a model for building the kinds of relationships and communities that will allow each person to find his or her personal mission.

Im contemplating a social media fast. Because I'm in charge of it, then I get to decide what that means and what will be most useful... and im allowing myself a bit of time to really think that through... but it's going to look something like this....

I will fast as long as I feel that it's fulfilling me. I may pause the fast, check in, then start again (intermittent fasting).  I'll continue my blog, so you can find new Art, articles and musings there if you're subscribed and interested in such thinks (www.bluephoenixart.com click on blog). Some blog posts automatically share to social media, but I won't be checking it unless I say otherwise.  Some of my blogging might even be about the experience of fasting from social media. Who knows what will come of it, but I feel a nudge...and Advent is approaching...so it's timely for me to explore this further.

I'll note that I've been feeling a big urge to fast from food, as it's a very popular means of putting diabetes into remission right now.  That said,  the medically directed fasting that Fran had me do a month ago actually triggered an adrenal episode along with certain anorexic behaviors.  Something I'll write more about another time.  But for now, I'll say that there's great power in taking an inventory of how I spend my time (taking the focus off food) and choosing to shift the focus in a healthy way....a fast that is helpful, not harmful.

To be clear...Im NOT fasting from my connections with people.  So please maintain contact via email,  phone, Facebook messenger or text message.   I won't be checking messages in Instagram.

Finally, my reasons for this are many, ranging from a need to deepen my contemplative practice, to a need to move my art in a new direction, to a need to enrich my actual human to human connection (which is difficult when you're living with chronic illness), to a need to protect my heart (and therefore my healing body) from the increasingly painful dialogue during this election season.  For me - living with Adrenal Insufficiency and recovering from being very ill with Autoimmune Dysautonomia - these needs are essential to my healing.

After writing all of this, I think I have my answer... I'm just going to begin.   If there's anyone who'd like to join me in this social media fast,  and together we can grapple with finding other ways of maintaining contact... and dealing with the issues that arise without social media...send me a message (don't reply here, because ive disconnected).

Let's get Real About Adrenal Insufficiency

Published in the Mighty

Let's get real for a minute about #adrenalinsufficiency. We are not talking about adrenal fatigue.  Adrenal Insufficiency is a condition that can only be diagnosed through a cortisol stimulation test (high or low dose). Once diagnosed, a person becomes "steroid dependent" and must take corticosteroids to stay alive.

In my  case, it means that my body doesn't produce enough cortisol to handle a burst of adrenaline. It's a rare disease so there's not alot of money in it.  No nifty monitors like they have for diabetes.  No Epipens to make the injection easier.  Instead, it's a fine tuned guess based on situation, experience and symptoms.  More stress = more cortisol.  Sudden burst of stress = inject immediately or I could die waiting for the oral steroids to metabolize.

This is what the needle and vial looks like (see below).  "Draw it up and stab it in the thigh muscle because you're a badass Heather," I say to myself, "and that's what you do when its your life."  Then I make myself push the thick bruising liquid in to the muscle.  Ouch. 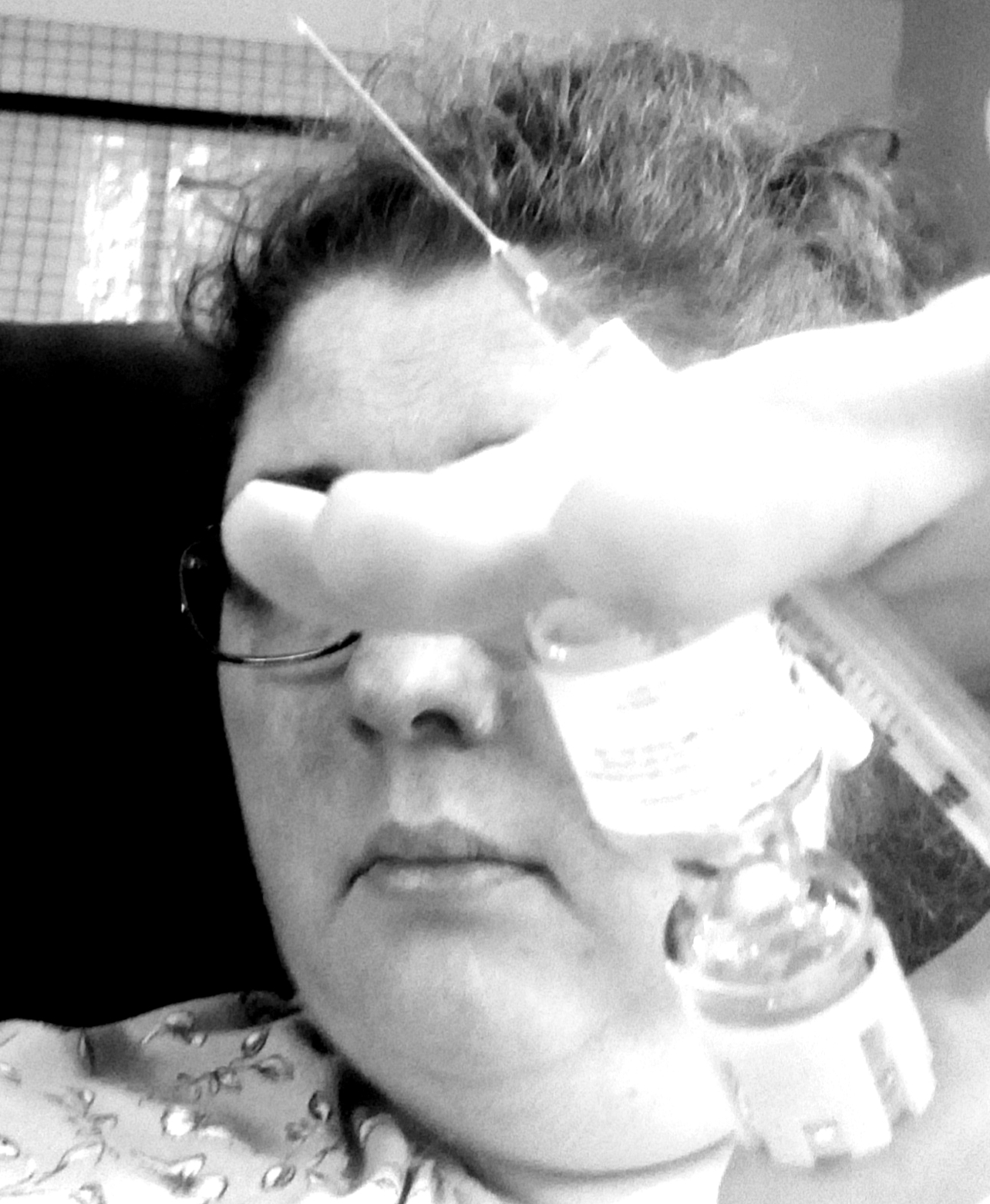 Unfortunately I've had to inject several times in the last month... and I live a fairly quiet life. There's so much more I can say,  but for now, I'll leave it with the ridiculous needle.

People have all kinds of judgments when they see someone with adrenal insufficiency protecting their energy. It's so sad because the condition demands a level of self awareness that few could fathom.  Instead, misunderstandings develop or gossip begins.

In my case,  the are times even I must be clear -I'm not lazy, rude, antisocial, disheveled, conflict avoidant, or any other label that might come out of someone's mouth if they didn't know about my struggles with chronic illness. Furthermore, I am not needy...Lord help me I am not a NEEDY person. In fact, I'm a warrior.  Living with an invisible disability as a single mother in a world that often makes assumptions based only upon what can be observed,  well, that that's serious strength.

I've recently began a new art series exploring what it means to be a WARRIOR WOM•AN, and I discovered - in the paint - that she is both aware of her vulnerabilities and capable of things unimaginable to most. Sound contradictory? Think child birth. Having completed the Sentinels of my collection, I'm now exploring medical fragility in the context of what it means to be a WARRIOR WOM•AN.  Disability, life with chronic illness, invisible conditions all mean living with an awareness of finitude and the delicate nature of life.  It means asking for help, and risking the judgment of others.  Some give of their time freely,  while others harbor resentment.  I was once called a bottomless pit by someone very close to me. It was scarring, but I learned from the experience. From that point on, I made the empowered decision to only accept help from those capable of saying No, because then I could be sure that their YES was freely given. I was no longer going to be harmed by those that said Yes only because they couldn't say No.

As a single mom, I cannot live in isolation.  I can, however, be very discerning about those whom I choose to include in my tribe.  Transparency, authenticity, direct communication, love... these are all values that we share. Further, we place the needs of the children first.  My friends often remind me that my willingness to ask for help is a gift to my daughter.  She sees the tribe that unconditionally surrounds us, and she feels the depth of caring.  As she grows into a young woman, she will have a healthy sense of what it means to be part of a community, something that's increasingly lost to kids in an online world.  Most importantly, she knows she doesn't need to take care of me when I need help... Instead we are surrounded by extraordinary men and women who make sure that we're both squared away.  That's what community is for!

I never would have understood any of this until it happened to me. My life was isolated, even in marriage, as I believed I had to do it all.  No more... and my life is better as a result.

Introducing my Artistic Collection.
Warrior Women.
Watch the artistic journey unfold as I embark on another exploration of the unknown. Illuminating the unseen, rooted in the feminine, I incorporating the wisdom of Zen practice with the discipline of the Samurai. Color conveys the complex interplay between paradoxical ideas that flow together in the form my spiritual expression. From soul to fingers to brush to canvas... the WARRIOR  WOMAN begins.
"Alpha"
She is the FIRST
WARRIOR WOMAN SERIES
DM for Purchase Information
30 x 30 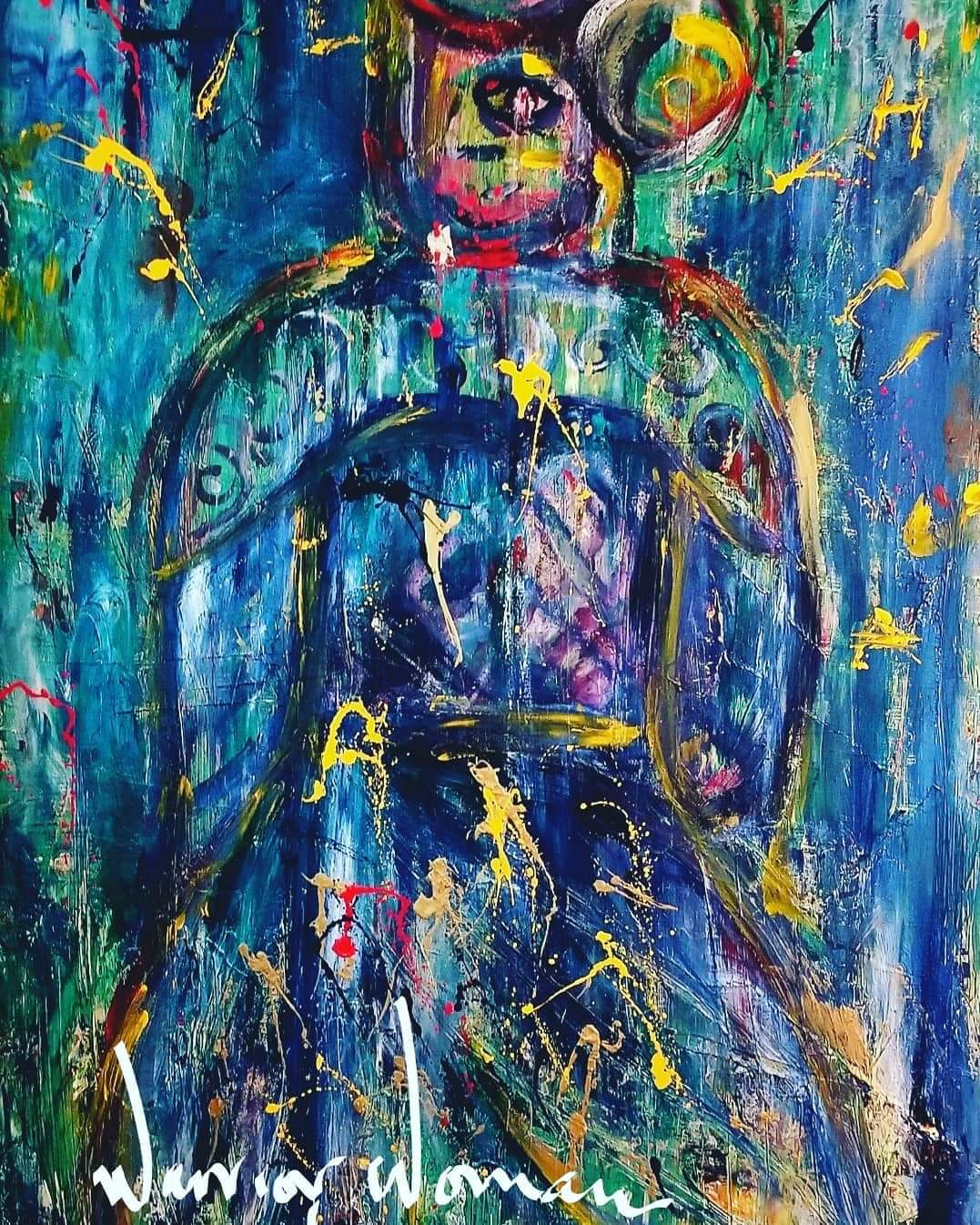 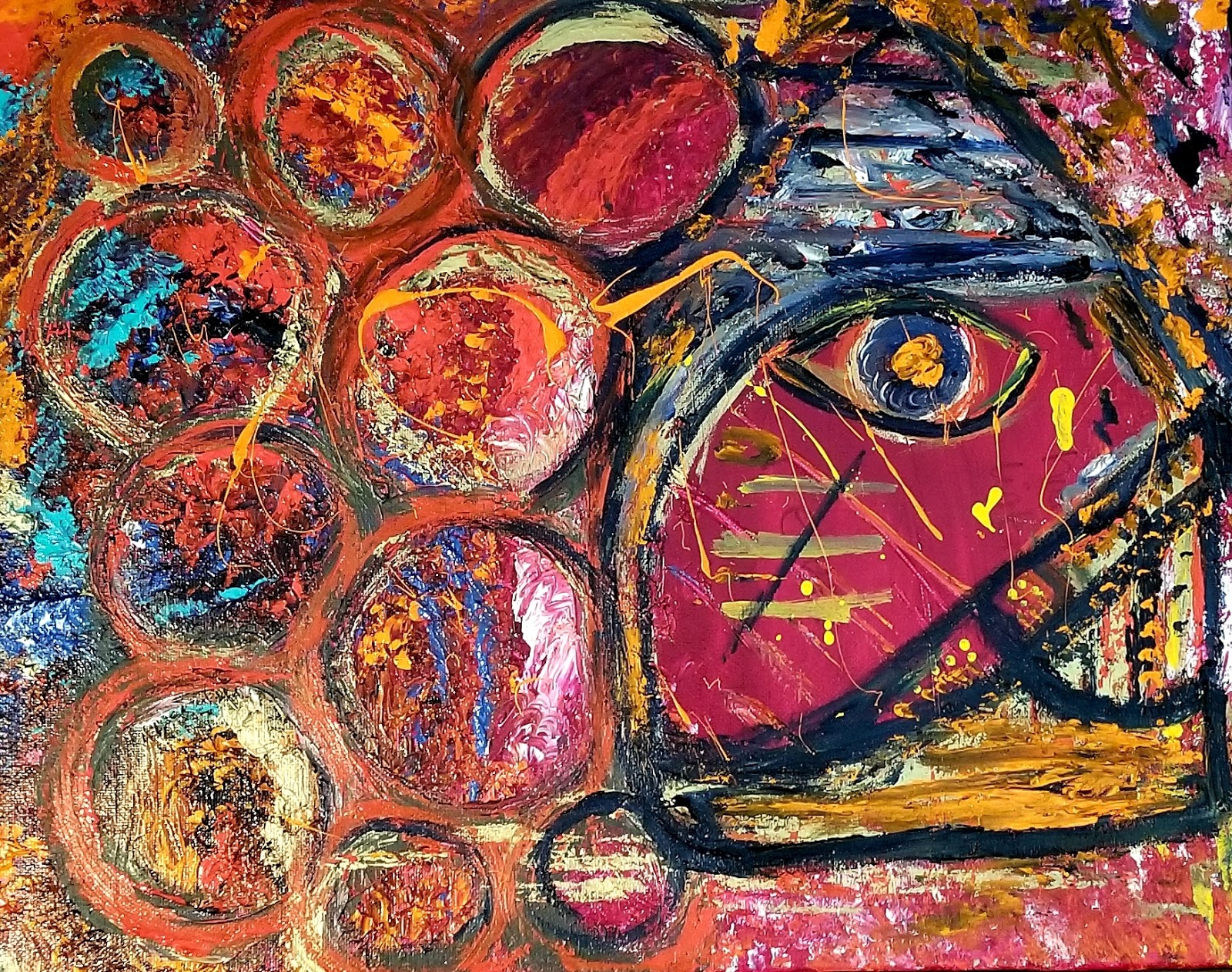 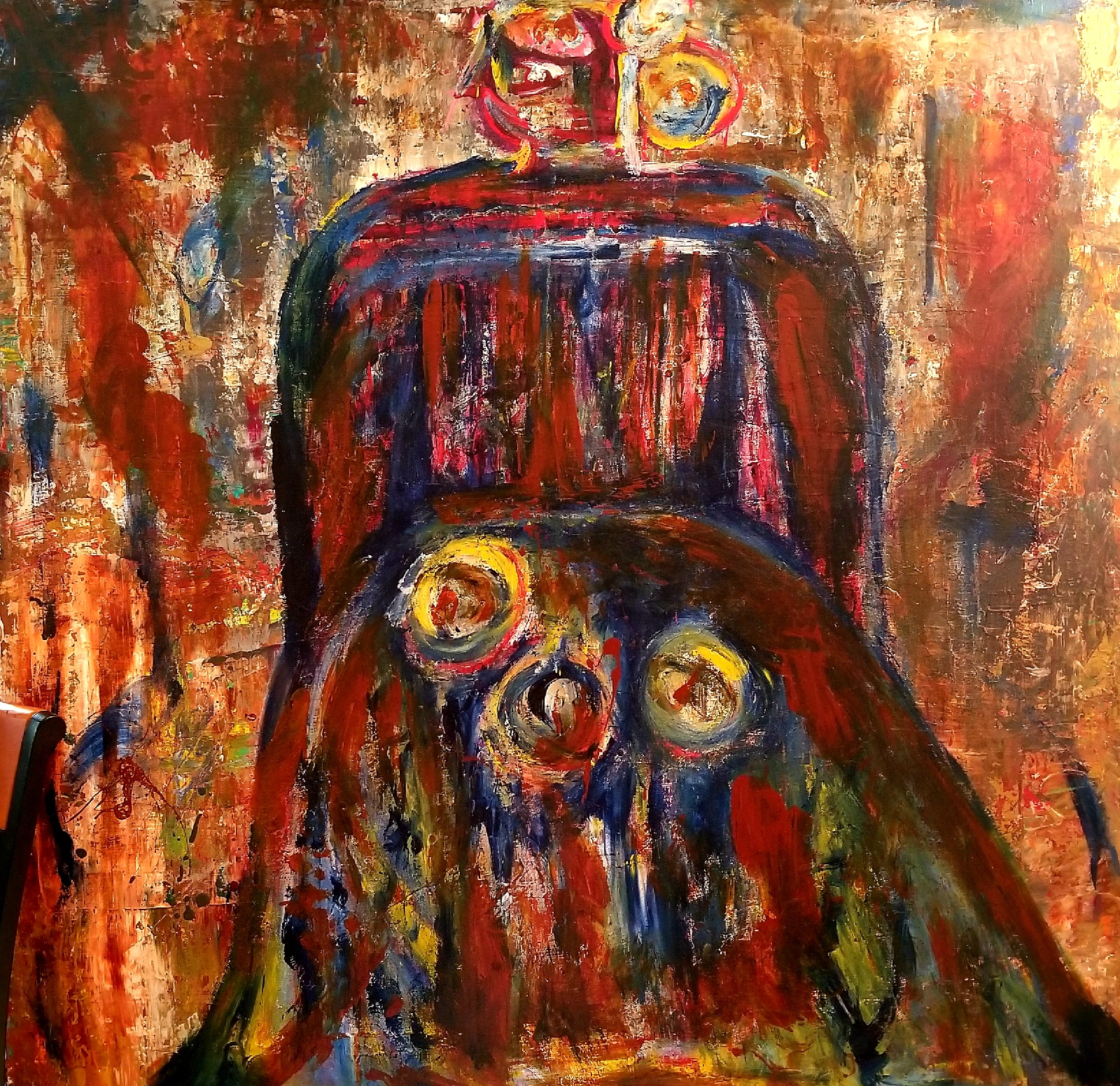 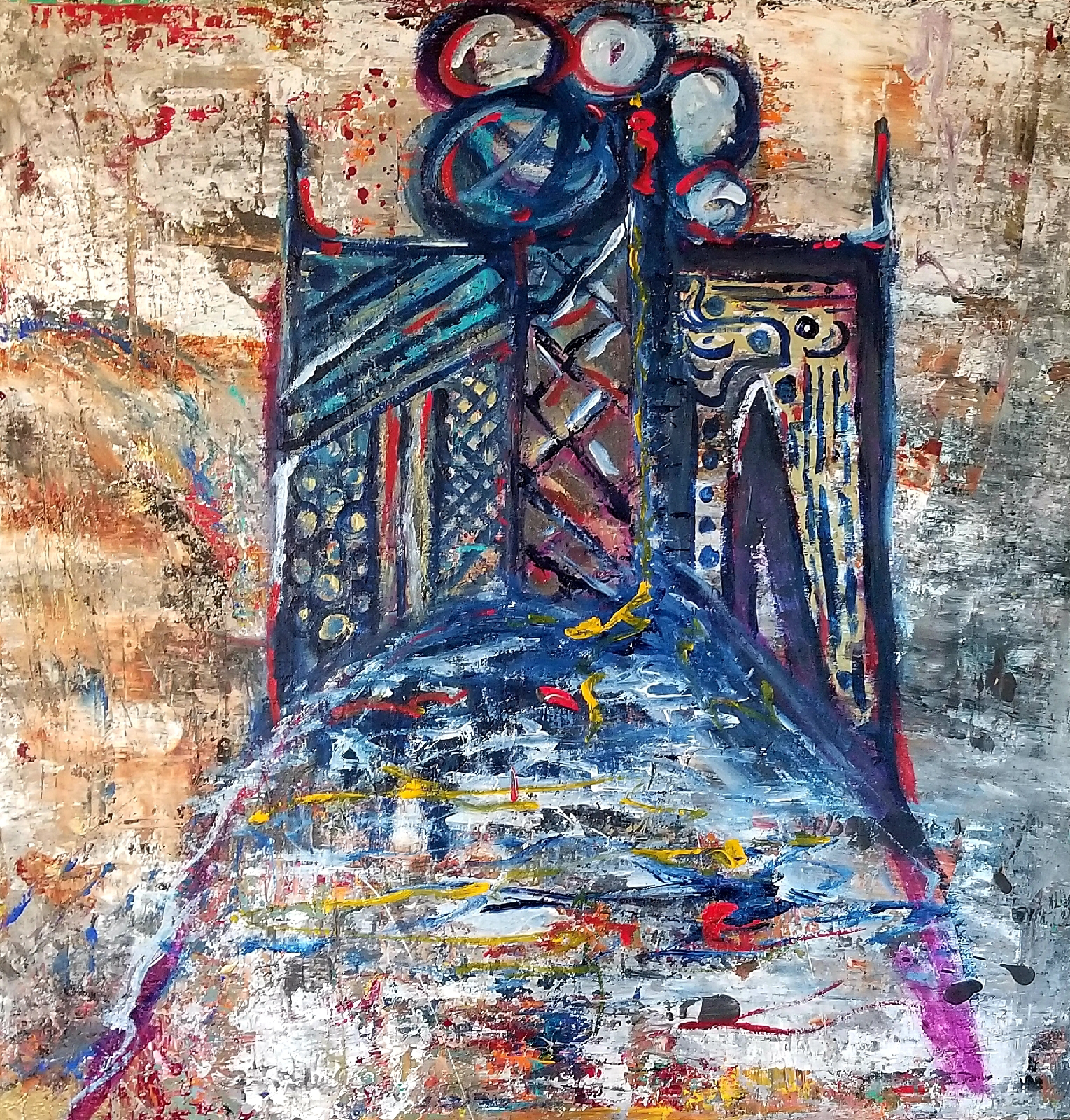